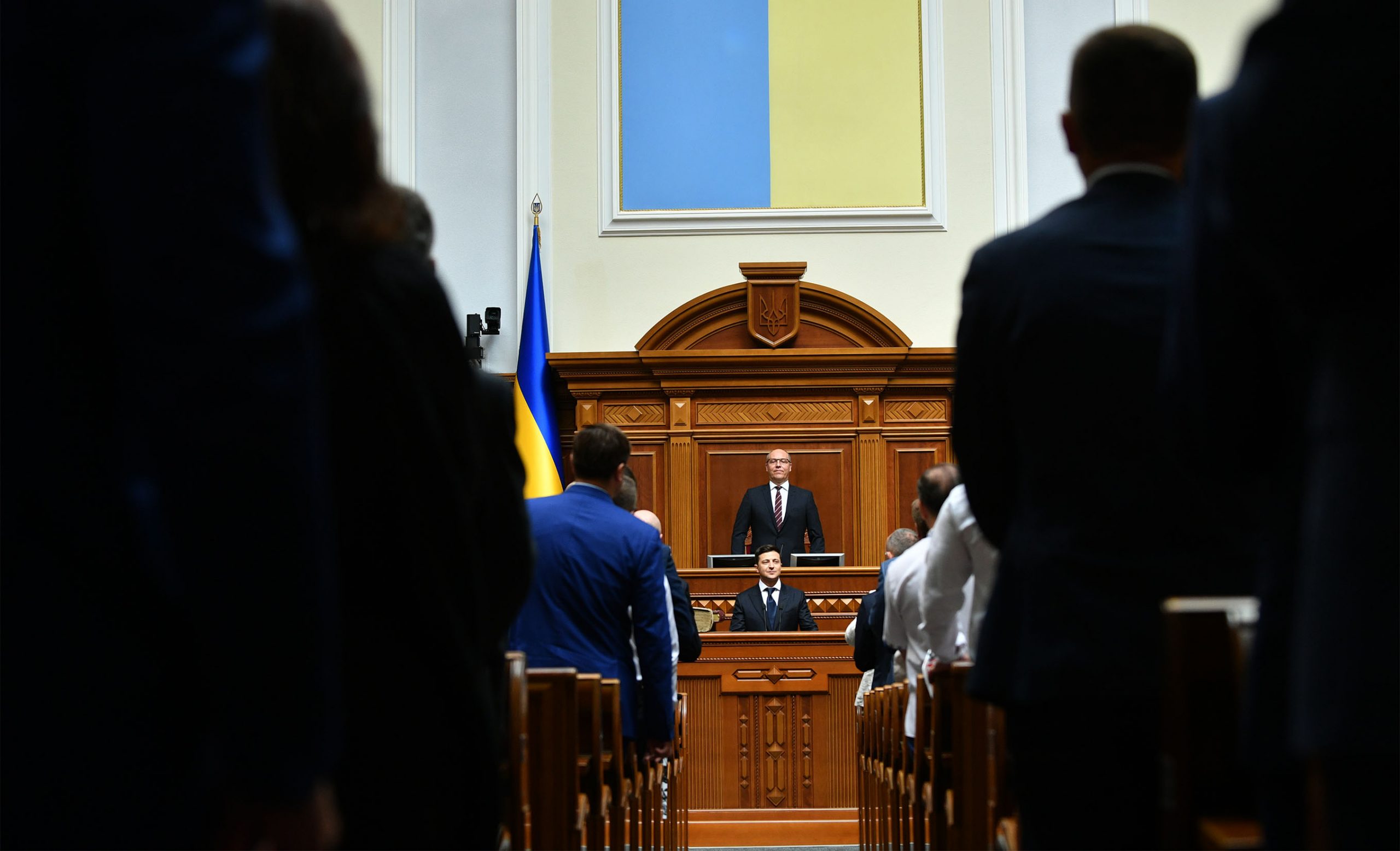 After the victory of Volodymyr Zelenskyi in the presidential election, and the landslide victory of his party in the parliamentary elections, the realities of Ukrainian politics changed significantly. Some take the actions of the new government as amateurish attempts to lead the country and seriously fear surrender to Russia, while others regard the almost absolute power of the president as a great opportunity for the country to move forward and deliver positive changes.

How is democracy doing?

On 21 April 2019, a new chapter of Ukrainian history started, with Mr Zelenskyi winning the presidential elections with an enormous 73% of the votes, having not spent a single day in politics. The results of the parliamentary elections were almost as surprising, with his party, ‘Servant of People’, gaining 43% of the votes, meaning 254 seats in the 450-seat parliament. What makes these results even more interesting and unusual is that most of those 254 elected members of parliament are relatively new to politics. As this fresh wave of newcomers shapes a transformed parliament, Ukraine’s democratic system is becoming exposed to a series of potential problems; stretching from the reduced professionalism in institutions, to risks to the rule of law and national security.

There are several signals that democracy and the rule of law in Ukraine could be about to face some challenging times. Ukraine`s institutions are not strong or independent enough to resist external impacts. For instance, parliament, in this new political scenario, could see its autonomy decreasing, as the president now has enough majority to influence the chamber strongly. The existing majority that the president currently holds in parliament means that any legislative initiative is approved easily. Having such a comfortable majority in parliament can be deemed as beneficial for the president when it comes to the implementation of reforms. However, the current political situation differs from a regular strong parliamentary majority. The fundamentals of the rule of law; the separations of powers, and having checks and balances, are put into question. Essentially, the current situation risks parliament becoming too lax and ends up adopting laws that are proposed by the presidency, without any debate and through systematically ignoring the opposition.

Another relevant concern is that the new governing party might also abuse its new strength to pressure the opposition. It has been less than 6 months since Volodymyr Zelenskyi and his party came to power; but they are already moving against opposition forces, and at times, illegitimately. The newly appointed Procurator General instituted debatable criminal proceedings against Ukraine’s previous president, Petro Poroshenko, however the charges were dropped. At the same time, opinions of experts and civil society activists are being ignored. In turn, this lack of communication instigates a lack of trust in the state, which can also contribute to potential concerns of incompetence.

Last but not least, the reported attempts of the government to control every supposedly independent institution, are worrying. Some of the targeted institutions include; the Prosecutor General’s Office, the Supreme Court and the Central Election Commission. In most cases, this cannot be justified by the need to reform an institution. For instance, the reform of the Ukrainian Supreme Court had just been completed, and it was widely considered as successful. The same applies to the Central Election Commission – this institution performed good and transparent work during the last two elections, according to Ukrainian and international observers, and was supposed to operate for another 6 years. Therefore, it can be concluded that the only reason for its term being terminated is the wish to gain a more significant influence on the commission.

Occupied territories and the war

The occupation of Crimea by the Russian Federation and the conflict in Eastern Ukraine, have been the most crucial issues in Ukraine for the past 6 years. In the past years, there have been several attempts to bring the conflict to a diplomatic end. There was a strong and clear understanding that to win this war; it is necessary to bring the international community to support and help Ukraine while seeking justice in international courts. However, at the same time, the country must have been prepared to defend itself, if necessary. Nonetheless, a new president brought about a new strategy.

For Mr Zelenskyi, ending the war as soon as possible became the main goal. But here another problem arose: as former Ukrainian President Petro Poroshenko once said; “The key to peace is neither in Kyiv nor in Washington nor Brussels. The key to peace is in the Kremlin”. Meanwhile, Volodymyr Zelenskyi believes that peace can be reached via some concessions that could help in finding a middle ground with Vladimir Putin. Such a strategy, while possibly underestimating Russia’s intentions and willingness to use force, could represent a risk for Ukraine. This brought many citizens to the streets in protest. Caught between a rock and a hard place, the new president has a tough time solving this issue. Over time he could find out that – regardless of the concessions –Russia is not interested in peace.

A country at crossroads

In conclusion, Ukraine today is at a crossroad. The new government certainly has a golden opportunity to implement deep and crucial changes, while getting rid of old Ukrainian problems and effectively make people`s lives better. However, they should remember that with great power comes great responsibility and that although they were given the trust of a large share of the Ukrainian population, should they fail to deliver on what they promised, those same people will not hesitate to hold them accountable. After all, Ukrainians are people of freedom, who love their country, as has been proven on numerous occasions.