Annita Demetriou has served as Speaker of the House of Representatives in Cyprus since June 2021. She is the first woman and youngest person to hold the role. An advocate for women’s right and equality between men and women, Ms Demetriou has helped to deliver legislation that criminalised sexism and discrimination against women.

How does it feel to be the first female and the youngest ever person to serve as President of the House of Representatives of Cyprus? Do you think that the glass ceiling has been broken with your election at this position?

The burden of responsibility is enormous and I am fully aware of it.  But I learned, very well, that if you want to change things, there is no easy way.  You have to fight and clash with the establishment.  Be part of the change.  Therefore, I will do everything I can, always with the support of the other Members of the House, to raise the bar high. To stand by every citizen who needs us.  For a society that will promote meritocracy, respecting dignity and providing equal opportunities and possibilities to every individual citizen.  As for whether the glass ceiling has been broken, the beginning has certainly been made and it is important when we climb the ladder of hierarchy that we do not pull it behind us but spread it out and create conditions for more and more people to rise and contribute to the society we want to build.  The effort for a new perspective must be continuous, at all levels, and this will encourage more women and young people to participate satisfactorily and assertively in public life.

Undoubtedly, progress has been made and the gap has narrowed.  It is indeed optimistic that today we can see on the world stage women excelling in key positions and being given the opportunities they deserve.

But the point is that we still have a long way to go before we achieve full equality.  Therefore, if we want to have the democracy we deserve, we must safeguard all that is needed for equal participation in the decision-making centres.  Only in this way is democracy served fairly and representatively and the rule of law itself is strengthened.

Parliamentary diplomacy plays a key and essential role in an attempt to find solutions, at the level of national parliaments, to critical issues that concern societies and states, such as the immigration, energy, environmental and humanitarian crisis.  Our priority, as the Cyprus’s parliament, is to strengthen the position of the Republic of Cyprus, playing our role both at bilateral and multilateral level, strengthening our ties with other states and focusing on the need to solve the Cyprus problem by highlighting the role of our country as a factor of security and stability and as a bridge of dialogue between Europe and the wider region.

It is essential that we continue to denounce Turkey’s illegal actions, especially regarding Famagusta and the exclusive economic zone of the Republic of Cyprus, in every international forum.

What is your message, as a young politician, to the youth in Europe who are striving to reach their dreams in such an unstable world?

To participate!  Not to be complacent and not to be disappointed. To have a voice. To take life into their own hands and try to change what bothers them or disappoints them.  To harness the passion and drive of their youth and believe that they can change the course of things…  That they can shape the future as they deserve. 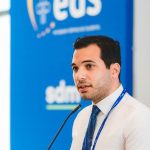